2005 was my first Sala and i am problaby one of the few that have done the race most times, 15 Year this year and a finisher t-shirt. Thats was great.

Late to start as usual, very comfortable with the race because i have done it many times. Six days after Copenhagen was a challenge.

New for this year is that they had chip so you could choose to take it easy in the swimstart. But not me. I swam with the top as usual, had a pretty bad swim, zick zack and did not see anything, the sun was in the way , really hard swim, i dont know why i was swimming like a snake, but the time was ok. Up on the bike and felt good, pushing pretty hard on the first lap, on the second lap i started to feel empty in the legs but the issue was that my back started to hurt, the pain from IM came back, so the last lap was a survivor lap with harder wind also.

The run, well my legs was done the first 2 km, but then they started to feel better,  i hade some splits around 4,30 but it never really got up in speed, and the last lap i got payed for the short recovery from IM. Really slow but steady run.

On a good day the swim would have been 1-2 min faster, and the bike 10 min and also the run. 4,30 i still pretty hard to beat, but i am slowest cyclist 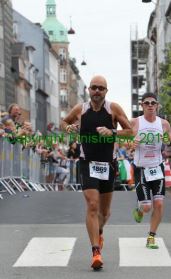 Copenhagen every day during the Week. I have been in Kalmar nine times and i know the circus and the place, really cose and family and a pretty small town. The whole town is about Ironman and every important person in the Swedish family triathlon circus is there to get connection or to be social. If you like that, then go to Kalmar, If you like a big town race with a really nice bikecourse and a crowed run course then choose Copenhagen.

I lived pretty close to the airport and the start of the swimming, Amager beach, at nice beach on a sunny summerday, now it was late summer and only a few people. But the expo and finish in in the town, i like that.

Anyway , in the morning i walked the 2 km to the start and as usual and fixed the bike and then got down to the start, very nice and smooth start 6 people start each 5 or 10 second, i was after the fast red cap that swim around 1hour, and i got a very nice start of the swim, not special warm in the water but not cold either 19,2 according to IM , straight swim, under two bridge and back, on the the way back a jelly smashed in my face. really surprising. And my face start burning , not much but i was most worried about allergic chock, nowadays you can get allgergic chock from anything 🙂 . But it was an easy piece , it was burning  a few hours.

The last 500 meter it started to get a little crowed in the water and i lost power and speed due to my handfull swimworkout the last eight weeks, but the swim was pretty solid and 1.13 was the time .

T1 was pretty fast for me anyway and i past lots of people , out on the bike and on the streets of cph. My bikecomputer did not start, i had to fix a little with it and after 4 km it started anyway. One of the reason to not have electric gears, streets in a town is always a challenge,, but after a 10 km we came outside town och straight forward road beside coastline, some rolling hills but almost flat. A caravan of fast cyclist was passing me, i held 170 watt and felt pretty comfortable and was not pushing anything. After a while we took left in the mainland of the island, and it was headwind and rolling hills, and then left again back to cph, the wind was pretty good but still rolling hills, and i started to feel discomfort. And on the second loop i had hard time with my back, butt and neck, typical too little lsd. I pushed more wattage on the second loop but less speed and after the second loop is was a neverending driving in the city of cph before T2 , if was not fun or good, better to have a bigger loop outside town

T2, the took the bike and grabbed my bag and switched to running shoes, felt pretty done for the day, but now it was a marathon to go, found the speed and my legs was pretty good, Very crowed in the town when we ran, and music on many places, after the third loop i started to feel very tired and lost 5 min/km speed but i did not walk anything just in waterstation.

It was a solid race and i felt pretty satisfied afterwards, and i can recomend the race. The organisation after the race was pretty good also. Easy to get food and massage and find the bike.